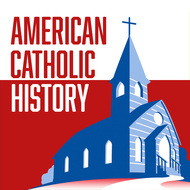 American Catholic History
Spirituality/Belief • Education • Culture
Sharing and discussing the amazing and unexpected history of Catholics in what is today the United States of America, starting with the first Mass offered on these shores in 1513, through the present day. Share your stories and those from your local area, and let's learn from one another!
Interested? Want to learn more about the community?

According to census data, a little over 1 million Americans claim Ukrainian ancestry, and I am among them. I talk up my Irish ancestry more, but I'm actually more Ukrainian than Irish.

Ukrainian Greek Catholicism has a long and storied history all its own, and we'll share some links to helpful sources of information about how so many Ukrainian Christians, after being Ukrainian Orthodox for about 400 years, returned to union with Rome in 1595.

In the United States, the Archeparchy of Philadephia and its three suffragan sees, Parma, Stamford, and Chicago, claim about 55,000 Ukrainian Greek Catholics. If you know any ethnic Ukrainians, especially any who are immigrants, consider letting them know you are praying for their homeland and any relatives who may be caught in — or participating in — the fight against the Russian aggressors.

And let's all pray for peace in Ukraine, and in the rest of the world. Who knows what other long-simmering disputes could explode into shooting wars if cooler heads don't prevail, and world leaders do not respond to the promptings toward peace constantly offered by the Holy Spirit and our Blessed Mother.

Ukraine has a number of patron saints, among them is St. Michael the Archangel. Join us in praying the prayer to him. 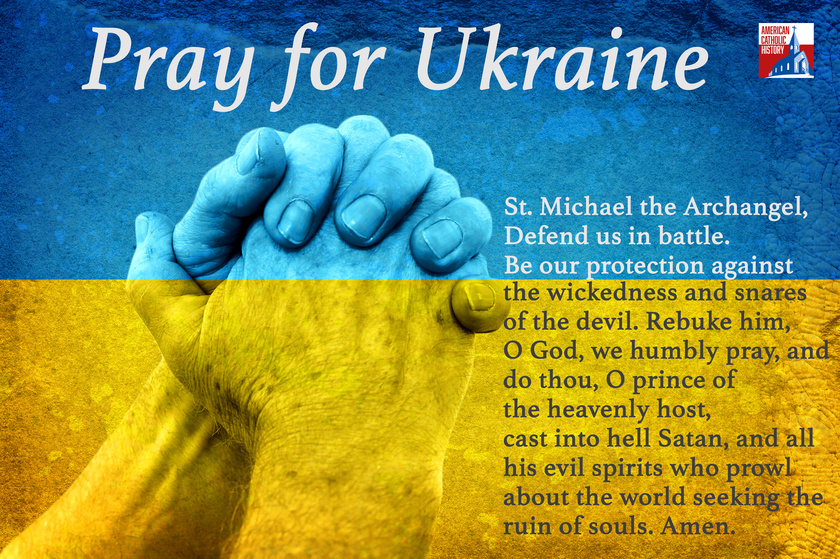 We'll be live at 12:30 Eastern today. Our Montessori school, Hilltop Children's House, will begin classes in two weeks, so we will have to find another way to do these live events. Also we're working on our next episode, and we're seriously talking with a long-time listener about an online course this fall.

Hundreds of babies' bones were discovered when the Erie Canal was dredged. Father Baker was horrified by this, and what he did in response included a "baby drop box."

Listen to the whole episode about this great man: https://americancatholichistory.org/venerable-nelson-baker

Ven. Nelson Baker was incredible. He saved lives in and around Lackawanna, just south of Buffalo, New York. He invented direct mail fundraising. He did whatever was needed to build institutions to make others' lives better. And he did it all by relying utterly on the intercession of Our Lady of Victory. As a tribute to her beneficence, he built the massive and breathtaking Basilica of Our Lady of Victory.

After time in the Union Army during the Civil War, then as a very successful businessman, Baker entered seminary. After ordination he was assigned to the parish and charitable institutions at Limestone Hill — modern day Lackawanna, New York. After six years as an assistant (with some time away), he was made pastor and superintendent. He had to face down creditors who came to collect on the massive debt his predecessor had built up. But he did so. Then he invited charitable Catholic ladies across the country to become members of the "Association of Our ...

How did two Roman martyrs, killed in either the third or fourth century, end up in St. Martin of Tours Catholic church in Louisville, Kentucky?

Well, anti-Catholicism has its fingerprints all over this story. From the execution of Bonosa and Magnus, to the anti-clerical sentiment sweeping through Italy which compelled the emigration of these relics, to the riot which nearly burned down St. Martin... But since 1901, the hallowed remains of these early witnesses to the Christian faith have rested in peace in glass-front sarcophagi beneath side altars in St. Martin.

Learn more about this very catholic — as in, universal — story.

This was a great episode to write and record. As I talk about in the episode, Twain was a jaded and cynical man later in his life. He'd seen a lot of ugliness, and he struggled mightily with the Question of Evil: how can an all-powerful and all-knowing God allow evil to happen, especially to innocent people.

He also had great antipathy toward the Catholic Church, especially the hierarchy. He had learned anti-Catholicism in his upbringing, and it was fed by some experiences. It came out in full-flower in his 1889 book 'A Connecticut Yankee in King Arthur's Court.'

This is what makes his treatment of Joan of Arc so intriguing. Published just seven years after Connecticut Yankee, Personal Recollections of Joan of Arc shows a tenderness and awe that Twain rarely exhibited — and that certainly wasn't a dominant feature of his works! This book brought a reverence to the main character that reads like hagiography, except that in Joan's case it is entirely true. Twain found in Joan a pure and...

Welcome to all our new members and supporters! Thank you for being here. We hope that you find the community enjoyable, supportive, and informative.

If you're new to Locals, a few notes on how this works.

Members can view posts (except supporter only posts) and like posts.

We hope those who are supporters will comment and post. The more people participating in the forum, the more interesting it is for everyone!

Who are supporters? Those who support our work with at least $5 each month. We actually have a great line-up of perks for supporters:

$5/month: access to all our "Supporter-Only" content. We've been working hard at developing some new content beyond our weekly podcast. Each month we plan to release a video in our new "American Catholic History On Location" series, taking you to American Catholic places near and far. Look out for our inaugural video tomorrow!

We also will be releasing longer-form interviews ...

Some glimpses into what we've been up to the last couple of days...

We've been hosting folks who are in Chantilly, Virginia for the National Catholic Singles Conference. 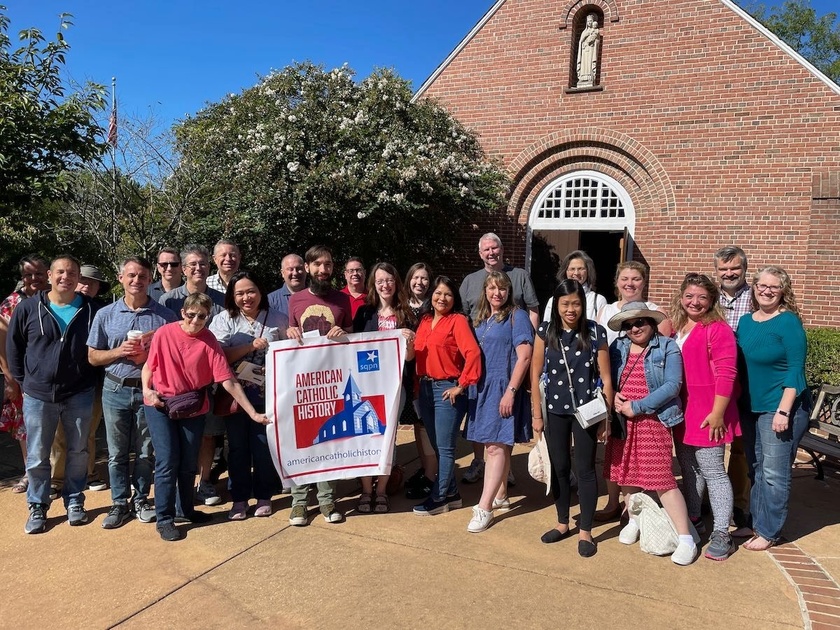 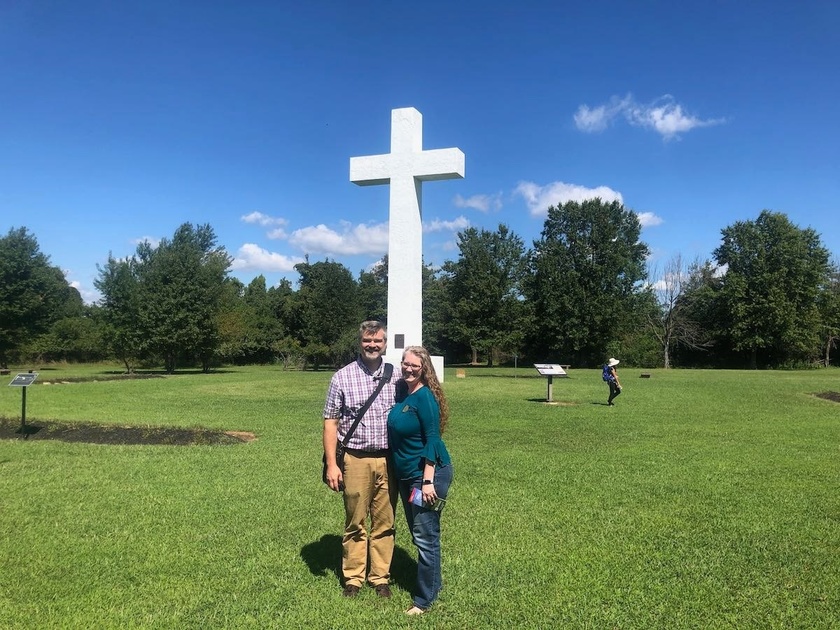 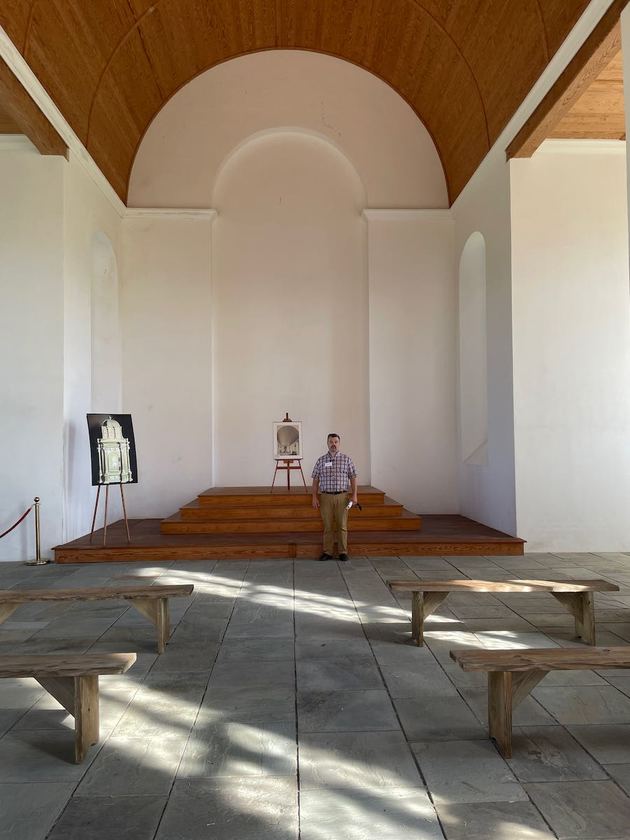 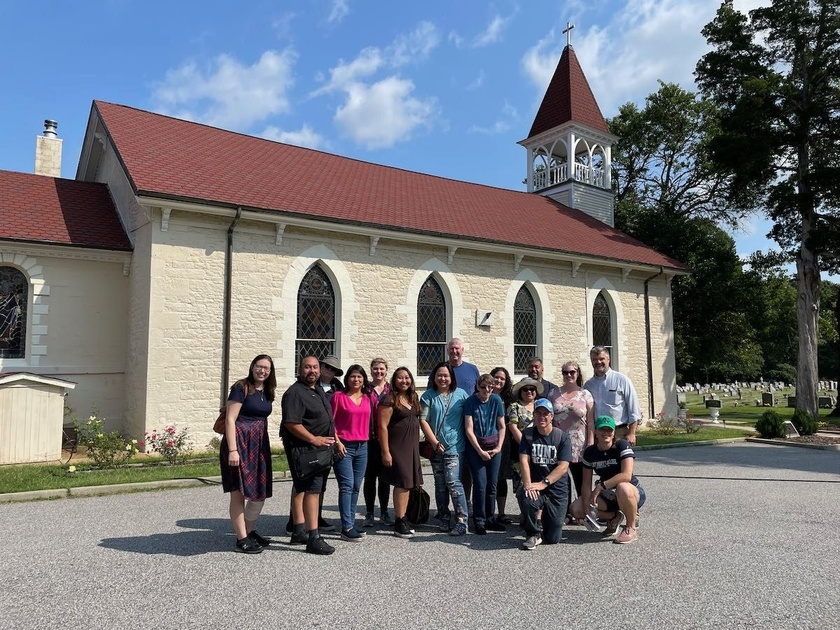 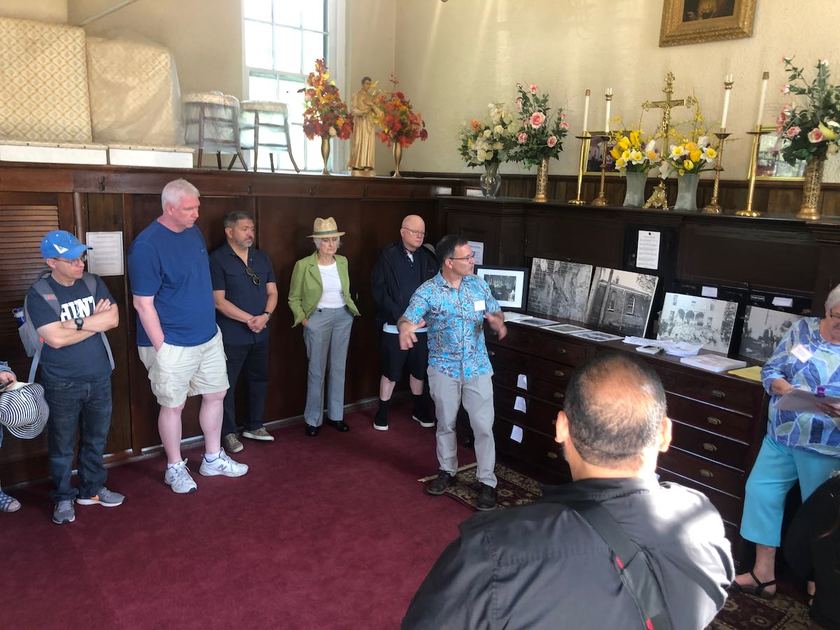 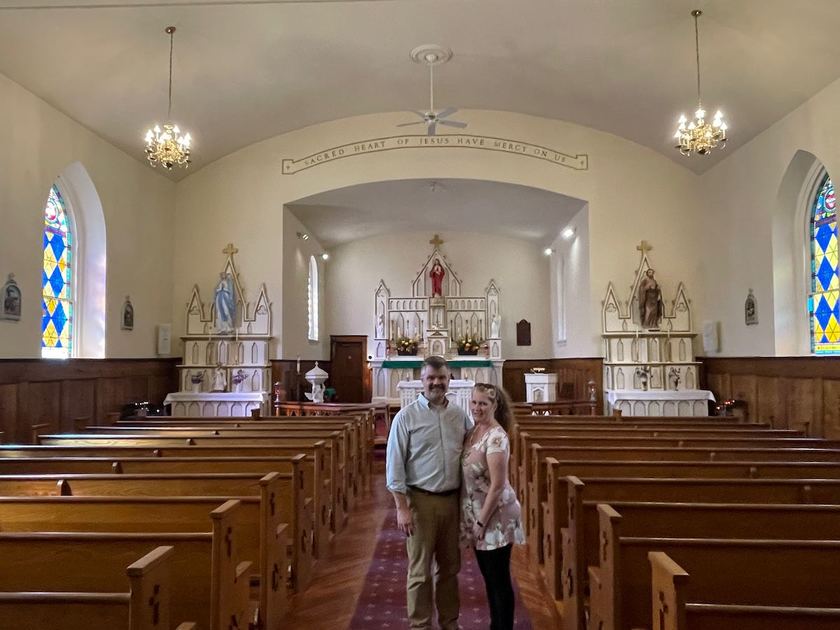 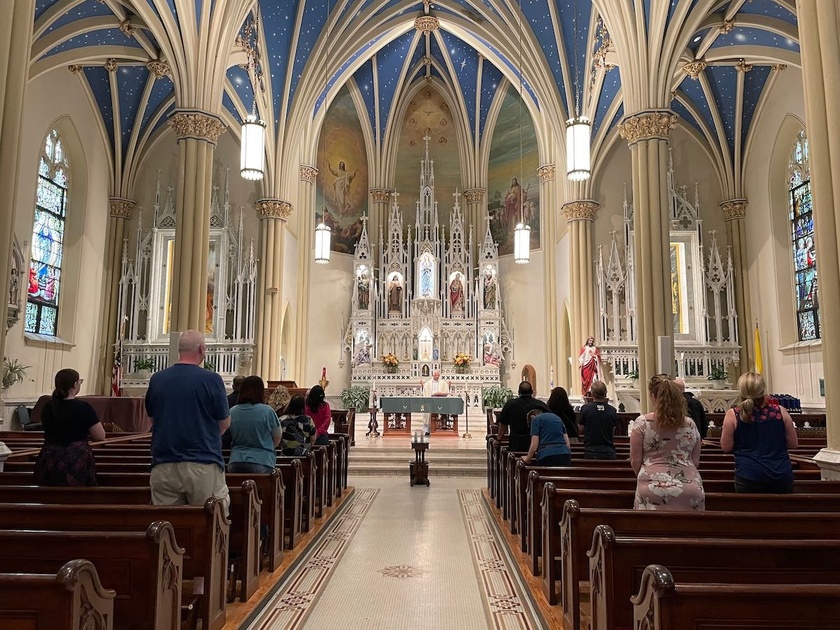 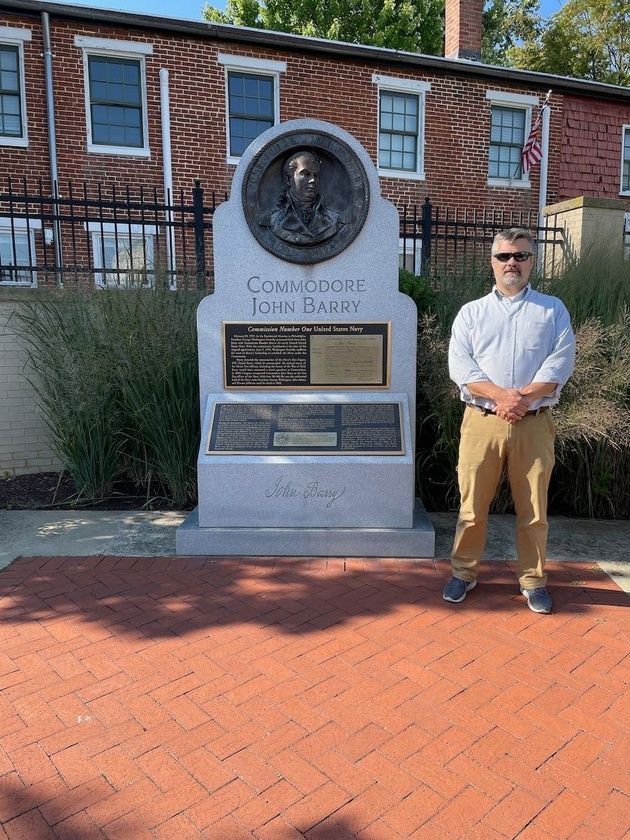 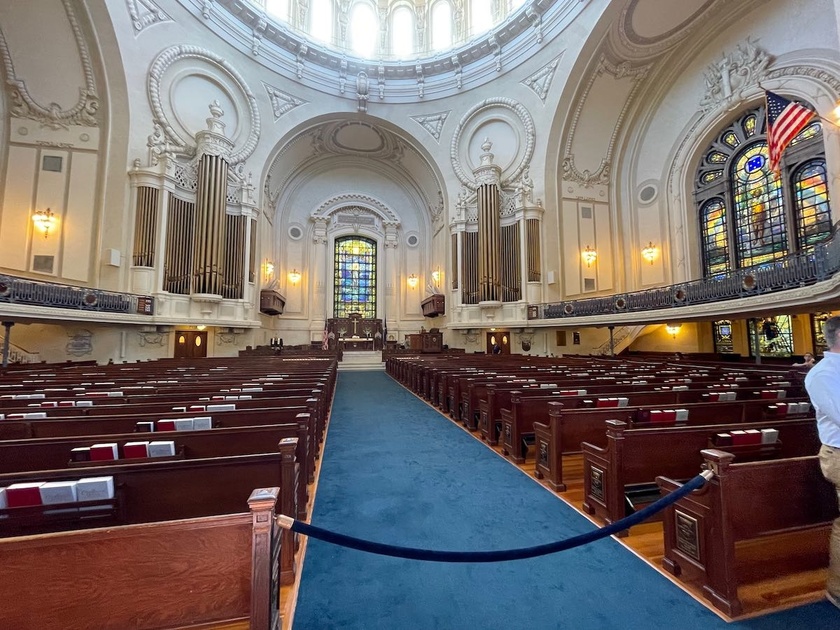 TomCrowe@TomCrowe
August 30, 2022
Pre-Pilgrimages for the National Conference for Single Catholics!

The next Conference is coming up shortly, September 16-18, 2022, in Chantilly, Virginia. Noelle and Tom will host three days of pre-events, September 14-16, visiting great historic Catholic sites in Maryland and Virginia.
Give a listen, and, if you're a Catholic single, join us at the National Conference for Single Catholics!

Did you know that Catholics first arrived on these American shores, and offered the first Mass here, four years before Martin Luther launched the Protestant Reformation?

Did you know that the first name a European gave to the Mississippi River was "Rio del Espiritu Santo," or "River of the Holy Spirit"?

Did you know that Charles Carroll of Carrollton, the only Catholic to sign the Declaration of Independence, was the wealthiest man in the colonies at the time? Or that the growth of the Church in this country owes a lot to the French Revolution and other European wars that drove Catholics — priests, bishops, religious, and laity — across the ocean for safe haven?

The history of Catholics on these American shores is far more interesting, inspiring, and all-encompassing than you probably realize.

Join us to learn so much more about the amazing men and women who gave of themselves for love of Christ to bring the Faith to these American shores.

Through our regular podcast, plus ... 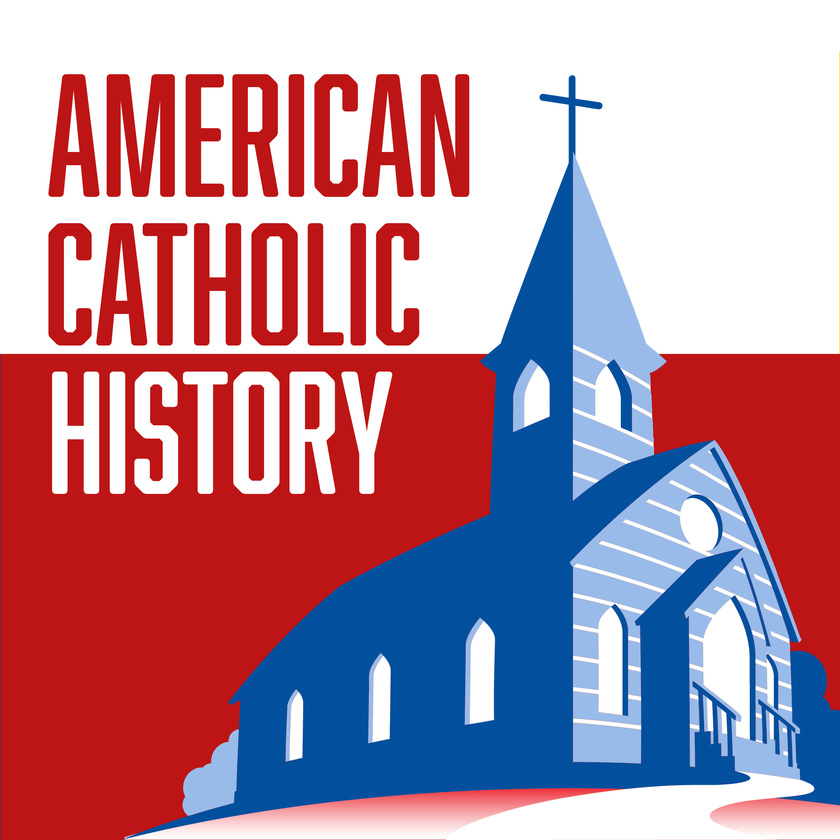 3
View All
0
Reply
Don’t have a Locals account yet? SIGN UP
I’m already a member Log in
Please keep this window open while your file is uploading...